TrustKeys IDO To Follow As TKblockchain Closes $4 Million Funding Round 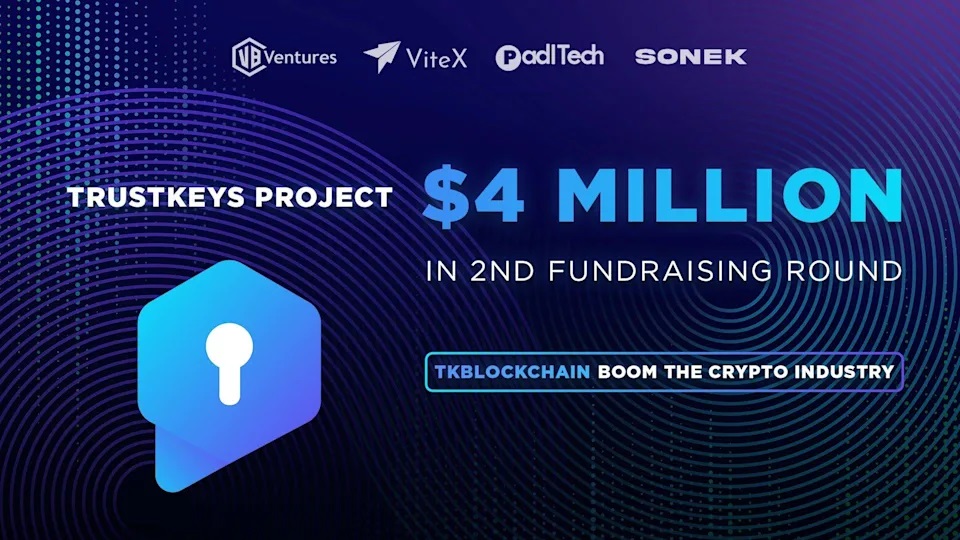 SuperApp TrustKeys is one of the latest projects initiating its fundraising (No=Not Only). TrustKeys is currently on its second round of fundraising and has managed to raise $4 million so far. TKblockchain project is doing its funding rounds, a crucial step for any project before it goes through its Initial Dex Offering which will make the project available to the public.

This funding round is expected to be over by the end of the month on the 27th of October with the IDO to begin shortly after. So far, the project has attracted investment and support from Vitex Capital, VBC Ventures, SONEK. JSC, Paditech. JSC, MH Group, Noron.vn, Giuptoi.vn, Krystal.app .

Not Just A Wallet, An Ecosystem

The TrustKeys sales and IDO will be a crucial step not just for publicity but also to cover all early costs and bring liquidity to the platform. Although it remains to be seen how well it will do, a successful IDO will come with immediate liquidity, a crucial benefit for any project.

TrustKeys is a blockchain project centered around its SuperApp which will provide a slew of different features such as a personal wallet with a 24-word seed, an exchange and a social media and messaging platform. These will just be part of the ecosystem as the project continues to develop newer innovations to integrate into the ecosystem. Moreover, the app is already available to users on the ios App Store.

The first and most prominent is the wallet. The TrustKeys wallet is native to the platform and functions similarly to others like Safepal and TrustWallet. The wallet allows users to hold tokens from multiple networks(ethereum, smart chain, etc.), giving users the ability to ‘own’ their coins in personal wallets rather than relying on a centralized exchange like Binance.

The wallet allows you to send crypto as you would expect but it also comes with a request feature enabling you to request payments from other TrustKeys users. NFT integration is also planned for a later date.

A Middle-ground Exchange And Encrypted Messaging

To most crypto novices, the popular centralized exchanges are the norm. For the slightly more advanced users, decentralized exchanges on defi like PancakeSwap become commonplace. A hybrid exchange is a union between both. It gives you the ability to trade with requiring extensive information. The TrustKeys exchange gives you access to spot trading with limit and market orders. Right now, margin trading is not yet available on the exchange.

Along with these features also comes a messenger that supports end-to-end encryption. Each account comes native with its own private and public key. The public key receives messages that only the private key can decrypt hence ensuring that privacy is maintained. The messenger has an inbuilt ‘send crypto’ function, allowing users to send crypto to whoever they’re talking to.

The final feature of the app is a social media platform. This will allow users to have a crypto news center where they can engage with like minds in the community. Tagged as ‘news feed’ on the app it comes with the following feature that brings accounts into your news feed.

So far the team is still following its roadmap and the end of the month should bring the project’s IDO up to date.

TrustKeys Network is a project developed by TKBlockchain Company (headquartered in BVI – UK) that has self-financed to develop since 2018 until now. After completing the basic modules of the ecosystem, TrustKeys Network began to carry out communication and cooperation activities to introduce to the community and investors about this special project. Expected time to deploy in the 4th quarter of 2021 and IDO implementation in October.

Blockchain Crowdfunding: 5 Free Tips to Get the most out of your campaign !

Reach New Heights with NFT: Discover How To Promote Your Business!

Blockchain Crowdfunding: 5 Free Tips to Get the most out of your campaign !

Reach New Heights with NFT: Discover How To Promote Your Business!

Are You Ready for the SocialFi Revolution? Get Ahead of the Trend in 2023!